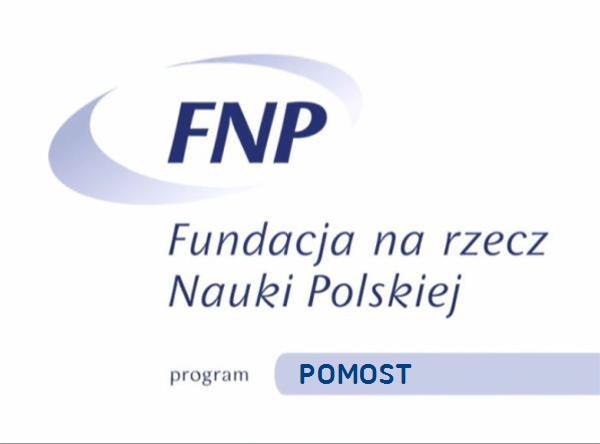 POMOST programme of Foundation for Polish Science is cofinanced from the European Union Operational Programme Innovative Economy 2007-2013 – “Strengthening the human potential in the science sector”.

Organozinc complexes are intensively investigated for their applications in various stiochiometric and catalytic reactions, as reagents in asymmetric organic synthesis, catalysts in polymerization of olefines and hetrocyclic monomers and as precursors of functional materials. Particular role in the chemistry of organozinc compounds is played by chelate complexes because of their applications in asymmetric synthesis of organic compounds and polymerization processes.

The aim of the first stage of the proposed project is synthesis of chelate zinc complexes supported by N,N and N,O-bifunctional ligands. Next, the research on the reactions of the obtained chelate zinc complexes with molecular oxygen is planned. This topic will be additionally extended by an investigation on the reactivity of dialkylzinc complexes with neutral nitrogen-nitrogen ligands towards O2. This research will be a continuation of the extensive research carried out in the parent group on the activation of molecular oxygen by main group metals’ organometallic compounds.

The main concern of the project will be testing the activity of the obtained and characterized zinc complexes of the LZnOOR or LZnOR type in stereoselective oxygenation of enones and polymerization of heterocyclic monomers.

In the framework of the presented project the following tasks are planned to be undertaken:

Preparation of the starting alkylzinc complexes requires strictly oxygen- and moisture free conditions. Such a technique has been successfully used in the parent group for many years. The obtained alkylzinc complexes and their oxygenated derivatives will be analyzed using single-crystal X-ray analysis allowing for determination of the structure of monocrystalline systems, proton magnetic resonance (1H NMR) and mass spectrometry (MS). Analysis of the epoxidation reaction yield will be performed using gas chromatography (GC). Analysis of the obtained polymers will be performed with the use of ESI-MS and MALDI-TOF.

Selection will be based on:

Top candidates in each group will be invited for an appointment before the same Recruitment Committee. Applicants may be interviewed in Polish or English. International candidates may be interviewed via Skype. Final decision will be reached upon judgment of the scientific experience, fields of interest and potential input into the project, which the candidate can bring. Detailed report describing all stages of the selection procedure will be written, signed and reported to the Foundation for Polish Science.